Medical cannabis has been legal in the Czech Republic since 2010, but it was not covered by health insurance, which made its availability very difficult.


Already at the beginning of this year, the Ministry of Health promised to pay up to 90% for products containing medical cannabis from public health insurance. This proposal was passed by parliament last Tuesday. From the new year, patients will pay only hundreds of crowns a month instead of the current amounts in the thousands.

A few months ago, the Minister of Health, Mgr. Adam Vojtěch: "We are aware that medical cannabis for some patients, such as those receiving a disability pension, may be financially unaffordable."

"Therefore, patients resort to illegal home self-cultivation of cannabis of unknown quality, which, on the contrary, can damage their health. That's why we want to contribute up to 90% of the sales price of cannabis in pharmacies to patients from public health insurance. "

"Thanks to our proposal, the amount of the supplement will be comparable to the supplements for the treatment of chronic diseases."

Health insurance in the Czech Republic

Reimbursement from the insurance will cover a maximum of 30g of medical cannabis per month.

"We consider it sufficient, because nowadays one patient consumes on average up to 10g per month. This was also confirmed by a questionnaire survey among prescribing physicians. However, in exceptional cases, based on the proposal of the attending physician, after approval by the review physician, it will be possible to pay in excess of this limit. ”Explains the Minister of Health.

The price of medical cannabis will be newly managed by the State Institute for Drug Control (SÚKL). 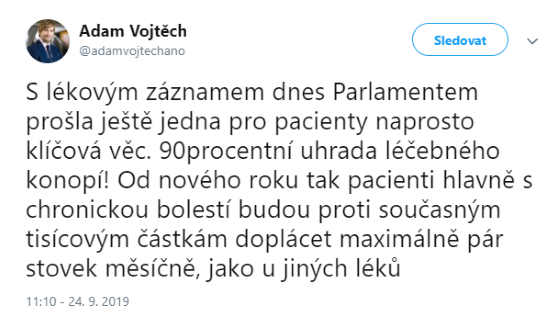 "Cannabis treatment is clearly an alternative treatment that involves a small number of patients. We welcome the Ministry's proposal that almost all the amount will be reimbursed to these people to whom cannabis can really help in treatment.

"Cannabis is in sufficient supply for patients in the Czech Republic," added Irena Storová, director of SÚKL.

Cannabis use is growing

In 2018, 447 patients were prescribed medical cannabis, which is three times more than the previous year. In addition, the number of registered doctors who are allowed to prescribe cannabis has increased. In March 2019, according to SÚKL records, there were 74 of them.

Storová adds: "Registration of doctors is very simple. The doctor will only send us a request in writing, by email or via a data box, which is usually processed by us within one, maximum two weeks. "

Cannabis consumption is constantly increasing . In 2018, 4,800 g of medical cannabis were released. This is almost 4 times more than in 2017 and twice as much as in 2016. "On average, it treats 67 patients per month with an average consumption of 6.3 g per month," Storová noted.

About 90% of cannabis use is for the treatment of chronic pain . In the sling is multiple sclerosis with four percent.

"I perceive cannabis as beneficial in patients with uncontrollable chronic pain. Although it is necessary to emphasize that there is no clinical study conducted in the Czech Republic that would prove its absolute effectiveness on chronic pain. In practice, we encounter a great interest of people in prescribing medical cannabis without having problems suitable for its indication. In short, they just want cannabis and not conventional drugs, "said Jiří Kozák, chairman of the Society for the Study and Treatment of Pain at the Czech Medical Association JEP.